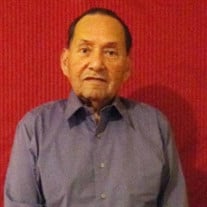 Antonio M. Lozano Jr., was born January 26, 1939, in Bexar County, Texas. Antonio gained his wings on December 12, 2020 at the age of 81. He is preceded in death by the love of his life, his wife of 57 years Margarita F. Lozano, son Ernest Lozano, parents Antonio Sr. and Hortencia Lozano, sisters Teresa Ybarra, Carmen Ruiz, Maria Elena (Nena) Guerra, and brother Miguel (Mike) Lozano. He is survived by his children, Cynthia Lozano Martinez, Antonio Lozano III, Joyce Lozano, Martha Lozano (Joel Olivo), and Deanna Lozano Perez (Dario Perez). Ten grand-children and five great grand-children. Sisters Patsy Osuna, Margie Ruiz, Janie Antu, and brother Jaime Lozano. Antonio was raised on the West Side of San Antonio at 444 Hazel St. As a teen, he attended Harris Middle School. Growing up his family worked as migrant workers traveling to Michigan to pick cherries, tomatoes, and cucumbers. He was an accomplished accordion player. They often played at the “Rainbow Night Club” with “Conjunto Falcon” originally called “Conjunto International”. He was also an amazing paint & body man. He worked for Coca Cola Co. After Coca Cola he went to work for ABC with Alamo White Trucking. Soon he opened his own body shop “Commercial Fleet Service” where he worked with 18 wheelers and had contracts with Coors Light and Rainbow Bread just to name a few. Along with his other accomplishments, he served in The United States Marine Corps in 1957 for 6 years. Antonio loved music, fishing, playing bingo, scratch off lottery tickets, and going to Kick-A-Poo. He always dressed to impress no matter what the occasion. He thoroughly enjoyed having all his family together. This always brought a smile to his face and immense pride. He loved his family dearly and will be missed by all who knew him. As Dad would say “That’s All Folks”. All attending must wear a face mask. Capacity in the Chapel: 50 Persons

Antonio M. Lozano Jr., was born January 26, 1939, in Bexar County, Texas. Antonio gained his wings on December 12, 2020 at the age of 81. He is preceded in death by the love of his life, his wife of 57 years Margarita F. Lozano, son Ernest... View Obituary & Service Information

The family of Antonio M. Lozano Jr. created this Life Tributes page to make it easy to share your memories.

Send flowers to the Lozano family.