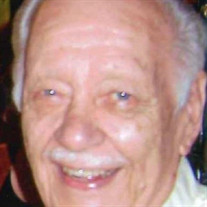 Arthur was born Dec. 30, 1929 in Durango, Mexico to Manuel Maximilliano Damm and Ruth Connell Damm and passed away on Saturday, May 2, 2020 at his home surrounded by his family. By means of a Silver Mine founded by his Grandfather Maximilliano, the Damm family amassed a great deal of wealth and were well known; however, Pancho Villa’s Mexican Revolution & family circumstances left Arturo born into meager means. Even with their many homes in shambles and loss of their family ranch, Arturo managed to make quite a presence in Mexico and even acquired the name of “Galan de Durango” (Prince of Durango) from those around him. His father passed when Arturo was 12 and he quickly became the head of the family caring for his mother and 4 sisters. At the age of 22, Arturo left for America to find a better life for he and his family with little more than .10 cents in his pocket. He found various jobs and then got an opportunity to work in sales at Joskes Dept. Store, soon becoming top sales-man. He then moved on to O.R. Mitchell Dodge, where he dominated sales and met Bonnie Wiley and had 4 sons together. In 1961 he opened Arthur Damm Motors on San Antonio’s west side. His unique name and slogan soon became well-known; “A Damm Good Car at a Damm Good Price”. After 40 years Arturo retired and leases his property at Zarzamora and Buena Vista where his dealership stood. Arturo married Donna Siddell in 1984 and they built Santa Cruz ranch in Von Ormy, Tx., which not only served as a sanctuary for many, but has hosted countless celebrations & weddings. He is survived by his wife Donna Damm, four sons; Arthur, Michael, Chris and Mark, his daughter-in-law Ran, 3 sisters; Clara, Bernice and Norma, 9 Grandchildren and 8 great grand-children, numerous nieces, nephews, cousins, uncles, and other beloved family and friends. This is just a small tidbit of Arturo’s life. A book could be written of his many escapades in Mexico, leading up to his life before leaving and the glorious adventure once he arrived in the United States of America. He placed his love in this Country and said it gave a person the most opportunity to make what he wanted in life. Arthur Manuel Damm not only made an exceptional life…He gave an exceptional life; to everyone around him and anyone who ever knew him…no one can say he wasn’t happiest whenever he was giving. Arturo Manuel Damm- “The man, the myth, the legend”! - You will Always be loved -

Arthur was born Dec. 30, 1929 in Durango, Mexico to Manuel Maximilliano Damm and Ruth Connell Damm and passed away on Saturday, May 2, 2020 at his home surrounded by his family. By means of a Silver Mine founded by his Grandfather Maximilliano,... View Obituary & Service Information

The family of Arthur M. Damm created this Life Tributes page to make it easy to share your memories.

Send flowers to the Damm family.