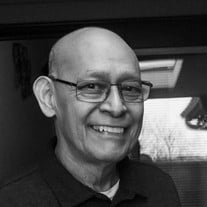 Daniel (Dan) Rodriguez passed away peacefully on April 12, 2019 in Carrollton, Texas surrounded by family and friends after a courageous battle against pancreatic cancer. Dan was born and raised in Devine, Texas. He received his BA in industrial/scientific photography from the Brooks Institute of Photography in Santa Barbara, California in 1979. After attending college, Dan and his wife, Angie, made a life for themselves with their two children, Nicole and Kevin, in Carrollton, Texas. Dan will always be remembered as a devoted husband, father, grandfather, son, and brother. Dan loved spending time with his family, especially his lovable and vibrant granddaughter Hazel. He also enjoyed many other things in life including poetry, science-fiction, food, traveling, and fishing. Photography was his passion, which he turned into a life-long career, ultimately retiring as a photographer for the Army & Air Force Exchange Service (AAFES). Dan was an American hero who served his country as a sailor in the U.S. Navy during the Vietnam War aboard the USS Hancock. Eventually he retired as an airman from the U.S. Air Force Reserve. He is survived by his wife Angie Rodriguez of Carrollton, Texas; daughter Nicole Rodriguez of San Antonio, Texas; son Kevin Rodriguez, daughter-in-law Chanél, and granddaughter Hazel of Flower Mound, Texas; his father Trinidad Rodriguez Jr. and mother Augustina Rodriguez of Stanfield, Arizona; brother Julian Rodriguez (Mary Esther) of Stanfield, Arizona; sister Josephine Smith (David) of Costa Mesa, California; sister Mary Ann Keith (Tom) of Chatsworth, California; sister Mary Helen Bates of Sahuarita, Arizona; brother Joe Luis Rodriguez of Stanfield, Arizona; sister Delia Rodriguez of Stanfield, Arizona; and numerous aunts, uncles, cousins, nieces, nephews, and friends. Visitation will be held on Friday, April 19, 2019 from 4:00 p.m. to 9:00 p.m., with a Rosary recited at 7 p.m. at the Camero Funeral Home Chapel. Funeral Services will be held Saturday, April 20, 2019 at 10:00 a.m. at the Camero Funeral Home Chapel. Burial to follow at First Memorial Park Cemetery in Von Ormy, Tx. In lieu of flowers, the family requests donations be made to the pancreatic cancer charity, pancan.org.

Daniel (Dan) Rodriguez passed away peacefully on April 12, 2019 in Carrollton, Texas surrounded by family and friends after a courageous battle against pancreatic cancer. Dan was born and raised in Devine, Texas. He received his BA in industrial/scientific... View Obituary & Service Information

The family of Daniel Rodriguez created this Life Tributes page to make it easy to share your memories.