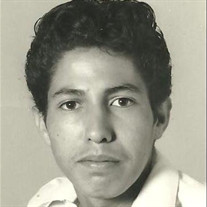 David Bernal Solis, Jr. son of Texas passed away on August 22, 2018 at Retama Nursing Home in San Antonio,TX. Born June 26,1946 in San Antonio, TX., survived by two Sons Eusebio Marcus Solis of Dallas, GA., David Anthony Solis of Marietta, GA., Sisters Elizabeth Padilla of Castroville, TX., Loida Solis of Springfield, Oregon, Julia Davila of Chicago, Ill., Diana Gonzales of San Jose, CA., Brothers Issac Solis of Corsicana, TX., and 3 grand children many nephews and nieces that loved him. Abraham of San Antonio. David Solis Sr. and Maria Solis of San Antonio took the family and migrated to San Jose, CA. in 1963 where all would work in the orchards picking fruit. In 1968 David married his ex Wife Rachel Palacios and had two sons. Later David being the third child of nine would attend San Francisco university for accounting. A mechanic by trade he was always helping others simply from the heart, by helping fix cars and side jobs for family and friends. David enjoyed fishing, but some of his most fondest memories were from his brother Eusebio who died in Vietnam, David would speak of how him and Eusebio would just cruise around listening to music and meeting friends. Later David returned to San Antonio until his passing. Dad you taught me many things, although he was never rich, he always said of how much he loved me and my brother,and now I teach my sons some of the same life lessons. Thank you Dad I'll miss you.

The family of David B. Solis Jr. created this Life Tributes page to make it easy to share your memories.

Send flowers to the Solis family.