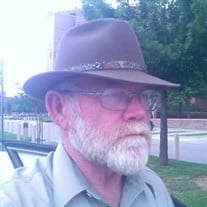 Deacon Richard Lynn Wells, 73, of Poteet, Texas, born September 15, 1947 in San Antonio, Texas lived his life for serving others in both the Church and Information Technology Profession. Richard was a 22 year Army Retiree that loved his God and his Country. Richard had a love for laughter so the following is to make him smile from Heaven. Richard encountered an unhandled exception in his core operating system, which prematurely triggered a critical “STOP” condition on Friday, August 6, 2021. Richard was an avid technophile, program developer, and educator, whose master functions were harnessed by all operating systems new and old. Some of Richard’s most impactful components subroutine centered around supporting his family, friends, and community. Richard was preceded by father, Thomas William Wells, Sr.; his mother, Bessie Louise (Robinson) Jank; and his loving wife of 47 years, Kattie Maxine (West) Wells. Richard is survived in legacy by his daughter, Crystal Izzo; grandkids, Ethan Izzo and Jayden Linton; his sister, Deborah Gaye (Wells) Schultz; his brother, Thomas William Wells, Jr.; and a host of loving nieces and nephews, cousins, and longtime friends from around the world. Diagnostics indicated multiple cascading hardware failures as the root problem. Though his hardware has been decommissioned, Richard’s application has been migrated to the cloud and has been repurposed to run in a virtual machine on an infinite loop. Visitation will be held on Thursday, August 12, 2021 from 4:00 p.m. until 9:00 p.m. at the Camero Funeral Home. A Rosary Service will be held on Thursday Evening at 7:00 p.m. at the Funeral Home Chapel. A Funeral Mass will be held on Friday, August 13, 2021 at 10:00 a.m. at St. Peter The Fisherman Catholic Church, 17534 N. State Hwy 16, Von Ormy, Texas 78073. Everyone is to meet at Church. Burial will follow at St. Mary’s Catholic Cemetery, Somerset, Texas. Face Masks Are Encouraged Capacity in the Chapel: 100 persons

Deacon Richard Lynn Wells, 73, of Poteet, Texas, born September 15, 1947 in San Antonio, Texas lived his life for serving others in both the Church and Information Technology Profession. Richard was a 22 year Army Retiree that loved his God... View Obituary & Service Information

The family of Deacon Richard Lynn Wells created this Life Tributes page to make it easy to share your memories.

Send flowers to the Wells family.