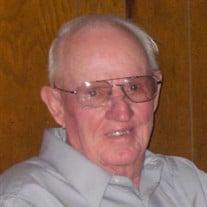 Eliga Patterson (Pat) Holley Jr. passed away peacefully at his residence on September 4, 2021 at the age of 92. He was born in Pleasanton on January 31, 1929 to Eliga Patterson Holley Sr. and Annie Lee Harris Holley. Pat grew up in Pleasanton and after high school was drafted in the Army. After 4 years of service, Pat returned home and married Violet Shearrer. They started a family and together they raised two children, daughter Karen Elaine and son Lee Harold. Pat worked for AT&T as a telephone man installing phones in homes and businesses until his retirement. He was a very friendly man, never met a stranger and loved to visit and meet new people. Pat was a member of the Masonic Lodge in Poteet. After retirement, Pat & Violet loved to travel. They traveled all over the U.S. with their RV and Pat made friends wherever they went. They spent most summers in the mountains of Colorado and even took the grandkids on some of their trips. Pat was always on the go. Even when he was 90, he would get up in the mornings, go to the gym and then join his coffee drinking buddies at Whataburger for a visit. He was lovingly referred to as “Poppy” by the family and it was a known fact that Poppy liked to burn up the highway and run family errands to help out where he could. He was always happy for a phone call invite to have dinner or enjoy a BBQ at one of the grandkids homes unless it was football day then he wanted a plate to go so he wouldn’t miss a game. He is preceeded in death by his wife, Violet of 64 ½ years, his parents, brother Marvin Holley and son in law David Luce. Pat leaves behind his two children, son Lee Holley and wife Loretta and daughter Karen Elaine Luce. Sister Billie Jean Davis. Grandchildren Tonya Schroeder and husband Quentin, April Holley Espericueta and husband Roland, Rusty Holley and wife Courtney, and Brandon Holley and wife Jessica. Great Grand children Joey, Cody, Brody, Olivia, Oliver, Kason, Emma and his namesake Elijah who was born just five days after his passing. He also had three bonus great grandkids Luke, Leo and Max and one great-great granddaughter Ivy. He also leaves behind brother in law Donald Palmer and sister in law Lois Holley. Graveside services will be held Friday, October 1 at 10 am at Rutledge Cemetery in Poteet.

Eliga Patterson (Pat) Holley Jr. passed away peacefully at his residence on September 4, 2021 at the age of 92. He was born in Pleasanton on January 31, 1929 to Eliga Patterson Holley Sr. and Annie Lee Harris Holley. Pat grew up in Pleasanton... View Obituary & Service Information

The family of Eliga P. Holley Jr. created this Life Tributes page to make it easy to share your memories.

Eliga Patterson (Pat) Holley Jr. passed away peacefully at his...

Send flowers to the Holley family.