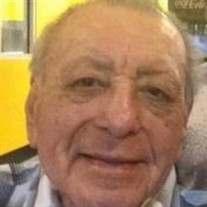 Ezequiel Uribe Ramirez, 91, gained his wings on December 15, 2020, his final days were spent surrounded by family in San Antonio, TX. He was born April 10, 1929, in Bethlehem, Pennsylvania. Our Father is preceded in death by his parents Felicitas and Guadalupe Perez; his wife, Emma; Son, Robert Ramirez. He is survived by his brothers Jesus and Tony Ramirez. Daughters; Yvonne Reyes (Mando), Linda Martinez (Ernest), and Donna Lisa Sanchez (Jerry). Sons; Johnny Ramirez (Paula), Gabriel Ovalle (Cindy) and Anthony Ramirez (Rosa); Daughter-in-law Beatrice Ramirez. Our Dad had16 grandchildren; 15 great-grandchildren and 24 great-great grandchildren; numerous, nieces, nephews, other relatives, and friends. Ezequiel joined the United States Army at the age of 23, on July 14, 1952, where he served his country proudly until his Honorable discharge. Soon after he went into a Civil Service position assigned to Kelly AFB San Antonio, Texas, and then was transferred to Battle Creek, Michigan where he was a part of the Cataloguing and Standardization Center for the United States Air Force. After 35 years he retired on December 11, 1984. He was proud of the contributions that he made, which always was a challenging and interesting job. He tremendously loved golf and was an avid golf player. Most days he could be found at the golf course. It was known to his family not to have any type of emergency until the final round of golf. He loved to watch the Dallas Cowboys and the Spurs play. His other pastime was going to the movies, specifically for the popcorn! In the evenings, he enjoyed watching Western movies. Wednesday nights, he looked forward to meeting up with friends to play pool at the VFW Post 4700. He was a family man first and loved to spend time with his family. Most weekends he could be found at home bbqing with his favorite tunes blasting in the background and a beer in hand. Summers were spent packing the family up and driving to the coast. He loved to dance (especially with his wife Emma) and never passed up the opportunity to dance at church festivals or during Fiesta or any other festive place.

Ezequiel Uribe Ramirez, 91, gained his wings on December 15, 2020, his final days were spent surrounded by family in San Antonio, TX. He was born April 10, 1929, in Bethlehem, Pennsylvania. Our Father is preceded in death by his parents Felicitas... View Obituary & Service Information

The family of Ezequiel U. Ramirez created this Life Tributes page to make it easy to share your memories.

Send flowers to the Ramirez family.