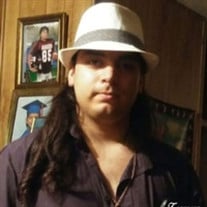 Gary Wayne Turnbull Jr., age 19, passed away on December 31, 2017 at the Methodist Hospital in Jourdanton, Texas. He was born on September 30, 1998 in San Antonio, Texas. He attended Poteet ISD but wanted to finish school early, so he graduated from the South Texas Leadership Academy in San Antonio, Texas 2 yrs. early. Gary was employed at McDonalds in Pleasanton, Texas for about 3 years where he made many friends and became the overnight Manager. He also met his beautiful girlfriend Sierra there. He loved gaming, SpongeBob, American Dad, Family Guy, anime and San Japan. He had even started learning Japanese. He was loving, loud, silly, a bit silly with meowing at us. He always said he was a kitty cat. His niece would call him Kee-kee. He would say “poke” as he pushed on any kids’ nose.   Gary is survived by his Parents Gary Sr. and Jessica Turnbull, Brother Marc A. Turnbull, Baby sister Jordan D. Turnbull and older sister Jasmine M. Butler and husband Eagle-eye Butler. He has two nieces, Hazel L. Butler and God-Daughter Hailee R. Butler all from Poteet, Texas. He also leaves behind his Grand-Parents Reynaldo and Maria Reyes, Aunt and Uncle Lucia R. Butler and Wilson Butler. Cousins Jeremy and wife Miranda and baby Constantine Butler, Cousin and San Japan partner Jealousy Butler all of Poteet, Texas. On his paternal side he leaves behind Grandfather Larry Turnbull of New Braunfels, Texas. Grand-Parents Jonathan and Becky Crowder of San Antonio, Texas. He is also survived by his girlfriend Sierra Latimer. Along with many aunts, uncles, cousins and friends.     Pallbearers: Marc Turnbull, Jeremy Butler, Eagle-Eye Butler, Matthew Fernandez, Jacob Ortiz and Randall Gaeta   Visitation will begin on Tuesday, January 9, 2018 at 4:00 p.m. at the Camero Funeral Home Chapel followed by a Prayer Service at 7:00 p.m.  Funeral Services will be held on Wednesday, January 10, 2018 at 10:00 a.m. at Camero Funeral Home Chapel. Burial will follow at Senpai Cemetery, 1054 Tank Hollow Rd, Poteet, Texas 78065.  Arrangements under the direction of Camero Funeral Home.  You are invited to sign the on-line register book at www.camerofuneralhome.com

Gary Wayne Turnbull Jr., age 19, passed away on December 31, 2017 at the Methodist Hospital in Jourdanton, Texas. He was born on September 30, 1998 in San Antonio, Texas. He attended Poteet ISD but wanted to finish school early, so he graduated... View Obituary & Service Information

The family of Gary Wayne Turnbull Jr. created this Life Tributes page to make it easy to share your memories.

Send flowers to the Turnbull family.