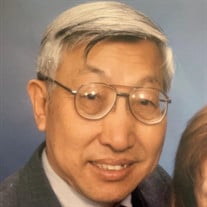 Dr. Howard P. Tchou, aged 88, of San Antonio, TX, passed away on Monday, June 29, 2020, due to natural causes peacefully in his sleep. He was born in 1931 to Che Tsien Tchou and Jen Mei Van in Shanghai, China. Howard went to Fu Shang High School in Shanghai, China. Upon his arrival to the United States, he attended Westtown School in Pennsylvania, and graduated 1949. He then received his first degree of Civil Engineering from Lehigh University in 1953. He worked in Philadelphia as an engineer and oversaw the construction of bridges throughout the USA in Illinois, Ohio and, particularly, the Walt Whitman in Philadelphia. Howard decided to change careers and attended Universidad del Valle in Cali, Colombia, for Medicine in 1959. He married Oda Otilde Victoria Rodriquez in 1960 (predeceased 1977). Howard then transferred and completed his medical degree at the University of Miami in 1964. He remarried in 1985 to Amanda Valencia Llanos. Howard is survived by his wife, Amanda; daughter, Anna Zoellner (Paul), grandchildren, Rebecca Chitsey (Corby), Clayton Zoellner, Erika Geddes (Samuel); sons, Stephen and Michael (Tina), grandchildren, Alexis, Madalyn; daughter, Frances Russell (Michael), grandchildren, Isabella, Madeleine; and son, Christopher (Tamara). Howard was a longtime serviceman, who served for the United States Air Force as a Pathologist, specializing in Hematology and Oncology, from Vietnam to Desert Storm, rising to the ranks of Colonel. From the Air force, he was awarded the Meritorious Service Medal, AF Outstanding Unit Award, and National Defense Service Medal. He was a member of the F. F. Fraternity, loved to travel, an avid tennis player, and enjoyed painting and classical music. A rosary will be held at St Luke’s Catholic Church at 9:30 am CT on July 20, 2020, followed by mass at 10 am. A live stream may be viewed at https://m.facebook.com/STLUKESANANTOINO/ His cremated remains will be placed to rest at Fort Sam Houston National Cemetery, San Antonio, Texas, with military honors on Monday, July 20, 2020, at 1:45 pm CT shelter 5(due to Covid, attendance will be restricted). You may view a live stream on https://m.facebook.com/profile.php?id=774693568&ref=content_filter Two more services will be held, the first, in Miami, Florida, at Woodlawn Park North Cemetery , the second, in Zarzal Valle, Colombia, both at later future dates. In lieu of flowers, the family requests that donations be made to St Jude Children's Research Hospital. https://www.stjude.org/donate/donate-to-st-jude.html?sc_icid=wtg-mm-btn-donate-now

The family of Dr. Howard P. Tchou created this Life Tributes page to make it easy to share your memories.

Send flowers to the Tchou family.