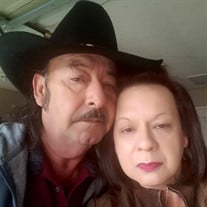 On July 26th of 2018, a golden soul, also known as Jesse Reyes Gonzalez, entered into his eternal rest at the age of 60 in Corpus Christi, Texas. He was born on July 23rd, 1958 in San Antonio, Texas to Josefina Reyes Gonzalez and Alfredo H.... View Obituary & Service Information

The family of Jesse Reyes Gonzalez created this Life Tributes page to make it easy to share your memories.

Send flowers to the Gonzalez family.