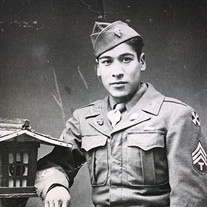 Jose R. Briseno, Jr. born December 30, 1926 to Jose Briseno, Sr. and Anita Rivera Briseno in San Antonio, Texas passed away on Friday, July 19, 2019 at the age of 92 years. Mr. Briseno was preceded in death by his wife, Amada L. Briseno. He is survived by his sons, Jose Briseno, III, Robert Briseno (Lillie), and Michael Briseno (Debra); daughters, Anita Alvarez (Ted), Elena O’Toole (Ward), and Victoria Harrell (Donnie); 18 grandchildren, 40 great-grandchildren, and 4 great-great-grandchildren; also numerous other family members and friends. Mr. Briseno was a faithful husband, loving father, always placing his family first. He had a genuine sense of humor, a bubbly personality and a friend to everyone he met. He proudly served his country in the United States Army. He enjoyed collecting all sorts of items, especially watches and model cars. You could usually find him tinkering on something he had picked up and needed some repair. He will be greatly missed by all whose lives he touched. Visitation will begin on Wednesday, July 24, 2019 at 4:00 p.m. at the Camero Funeral Home. A Prayer Service will be held on Wednesday Evening at 7:00 p.m. at the Funeral Home Chapel. Funeral Services will be held on Thursday, July 25, 2019 at 10:00 a.m. at the Funeral Home Chapel. Burial will follow at First Memorial Park Cemetery. Care has been entrusted to Camero Funeral Home. Condolences may be offered at www.camerofuneralhome.com

The family of Jose R. Briseno Jr. created this Life Tributes page to make it easy to share your memories.

Send flowers to the Briseno family.