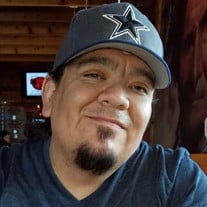 Some people only walk this Earth for a short time: their departure reminds us that ANGELS are watching over us. Julian Francisco Aguero of Poteet gained his wings on Wednesday, April 6, 2022, surrounded by his family at the age of 42 years young. He was born in Poteet on April 25, 1979, to Jose A. Aguero & Jesusa Garcia (Susie). He is a graduate of Poteet High School, Class of 1997 & a member of St. Philip Benizi Catholic Church. Throughout all of his challenges, Julian kept his sense of humor. He always had a smile on his face & hopefully brought a smile to yours. Julian would like to thank everyone for their support during his battle with his illness. Knowing he had everyone by his side gave him the strength he needed. He appreciated all of the love & support, from the well wishes, to donations for his fundraisers & of course, all of the prayers. Without all of this support he would not have been able to have fought, as long & hard as he did. There are so many people to thank for their support. As he would say, “Keep being awesome, keep being you!! He is survived by his beloved wife of 14 years, Valerie Almaras Aguero. His father & mother In-law, Octaviano & Mary Almaras. Sister & brother in-law, Veronica & Edward Flores. His brother, Joe Aguero & wife Sandy, sister, Mary Lou Aguero, sister, Rachel Hernandez & husband Frank & sister, MayLee Aguero. Nephews & nieces: Adriana, Jamie (Gary), Jonathan (Destiny), Nikolaus (Jackie), Alyssa (Jerel), Felicia Marie (still searching ) & Mikayla Rae (still searching). Great nephews & nieces: Xzavier, Lyeana Rhaye, Ezekiel, Julian Ryan, Malia, Sophia & Jaymeson Ray. Godson, Pedro Martinez The services for Julian will be on Friday, April 15, 2022, starting at 9:00 am at St Philip Benizi Catholic Church with a viewing. Rosary & church services to begin at 10:00 am with burial to follow at Madre Dolorosa Cemetery #1. The pallbearers will be Frank Hernandez, Bobby Meredith, Jonathan R. Martinez, Nikolaus R. Hernandez, Felicia M. Flores & Mikayla R. Hernandez. Honorary pallbearer, Julian Ryan Martinez. Life Motto: It is what it is, until it isn't then you adapt. Julian Aguero

Some people only walk this Earth for a short time: their departure reminds us that ANGELS are watching over us. Julian Francisco Aguero of Poteet gained his wings on Wednesday, April 6, 2022, surrounded by his family at the age of 42 years... View Obituary & Service Information

The family of Julian F. Aguero created this Life Tributes page to make it easy to share your memories.

Some people only walk this Earth for a short time: their departure...

Send flowers to the Aguero family.