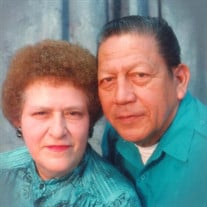 Mrs. Lorraine Ogden Rabago passed away on Thursday, October 8, 2020, one day after celebrating her 82nd birthday. Lorraine was born on October 7, 1938 in Atascosa County on October 7, 1938, the daughter of Albert Ogden and the former Stella Cortinas. Lorraine was raised along with her siblings on the family farm in Rossville. She attended Poteet High School. Lorraine is survived by her stepsons, Joe J. Rabago III and wife Eugenia, of League City, Texas, and Edward J. Rabago of San Antonio; five grandchildren: Jason Rabago, Hilary Rabago, Gerald Rabago, Eric Rabago and Melissa Rabago; seven great-grandchildren. Lorraine is also survived by her brother Albert Ogden, Jr., sisters Mary Garsez, Betty Jean Cumpian and Dorothy Alvarado; numerous nieces, nephews, great-nieces and great-nephews and a host of friends. She is also survived by her best friend, her precious Jewel, who was always by her side. She is preceded in death by her parents, Albert and Stella Ogden; husband, Joe C. Rabago Jr.; stepson, Gerald J. Rabago; brothers, Rudy Ogden and Frank Ogden; sisters, Alice Ogden and Norma Ogden. It was at work at Rogers Brothers Optical in San Antonio in 1962 that she would meet her husband, Joe C. Rabago, Jr. Lorraine and Joe married on June 1, 1962 in San Antonio. Mr. Rabago was a widower and had three very young boys – Joe III, Edward and Gerald – whom Lorraine adopted and raised as her own. Lorraine enjoyed traveling with Joe to Mexico, California, New York, Houston, Padre Island, and especially to the family farm in Rossville. She liked attending the Poteet Strawberry Festival and watching the strawberries grown at the farm win numerous awards. She and Joe loved going to festivals and dances, listening and dancing to polkas and country music. Lorraine was also a wonderful cook and was also a big sports fan. She enjoyed watching the Spurs and the Cowboys. Lorraine will be dearly missed by all who knew her and loved her. Lorraine, until we see each other again, may you rest in peace. Due to the Covid-19 Virus pandemic the viewing and the rosary will take place at the cemetery. Funeral service and interment will take place on Friday, October 16, 2020 at 10:00 a.m. at the Ogden Cemetery #3 located in Rossville.

Mrs. Lorraine Ogden Rabago passed away on Thursday, October 8, 2020, one day after celebrating her 82nd birthday. Lorraine was born on October 7, 1938 in Atascosa County on October 7, 1938, the daughter of Albert Ogden and the former Stella... View Obituary & Service Information

The family of Lorraine Ogden Rabago created this Life Tributes page to make it easy to share your memories.

Send flowers to the Rabago family.