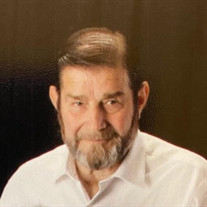 Luis Manuel Farias born on January 4, 1950 in Monterrey Mexico to Evangelina Farias Mendoza passed away on November 18, 2021 at his longtime home in San Antonio, Texas. Luis is preceded in death by his mother Evangelina Farias Mendoza and sister Maria Andrea Farias de Reza. He is survived by his Wife Marcelina G Farias, Son Luis Albert Farias, Daughter Carol Solano, Son Saul D Farias, Son-in-law Gabino Solano, Daughter-in-law Janitzia Pineda, Grandchildren Sebastian Solano, Dominic Solano, Clarissa Solano, Paloma Josephine Farias, Sister Lucia Castillo, and Goddaughter Anjelica Coy Robles, as well as many loved nieces, nephews, cousins and friends. Luis enjoyed going to church and practicing his faith. He was a family man and loved going to see his grandchildren’s sporting events and having cookouts with family and friends. He enjoyed being around people and his loud voice made him the center of attention. Luis loved taking his grandchildren fishing and to the beach. He immigrated to the US at a very young age and worked hard at the San Antonio railroad tracks. He spent many of his years as a taxi driver, worked at the Hilton, and in his later years worked with Uber & Lyft. He was a very hard worker and had high ethical values. He loved going back to his home town Monterrey where he was known as “Guero” and spent time with his nephews and nieces and their families along with his long time friend Jaime Flores. He enjoyed watching soccer, football, and baseball and loved being around his dog Chulis. Our father will truly be missed by his family, grandchildren, and all who knew and loved him.

The family of Luis M. Farias created this Life Tributes page to make it easy to share your memories.

Send flowers to the Farias family.