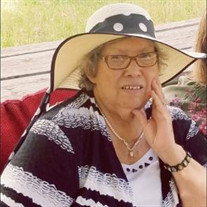 Margarita Flores Lozano was born June 22, 1941, in McCoy Texas. Margarita went to join her Lord and Savior on May 16, 2018. She is preceded in death by her son Ernest Lozano, parents Antonio and Tita Flores and sister Janie Fazio. Mother is survived by her loving husband of 57 years. Antonio M. Lozano Jr. whom she called “Mi Vida.” Her children, Cynthia Lozano Martinez, Antonio Lozano III, Joyce Lozano, Martha Lozano (Joel Olivo), and Deanna Lozano Perez (Dario Perez). Ten grand-children Angela (Albert), John Matthew (Jennie), Amanda (Daniel), Melissa (John), Marisa (Anthony), Anthony (Cristina), Adriana, Idalia, Jacob, and Jeremiah. Four great grand-children Damien, Carly Bella, Johnathon, and Averie. Sisters Alicia, Antonia, and brother Ruben. Margarita was raised on the south side of San Antonio in the Palo Alto area since the age of 11. As a young woman, she was known for her keen sense of style and always wearing high heels. She enjoyed attending dances, and this is where she met the love of her life Antonio Lozano Jr. at the Rainbow Dinner Club on N. Flores. They fell in love immediately. They soon eloped and were married in Seguin, Texas on January 10, 1961. Mothers entire life was devoted to being a wife, mother, and grandmother. She enjoyed gardening, sewing, knitting, crocheting, baking, and cooking. She was known for her famous German chocolate cake with homemade icing, chicken salad, homemade tamales, potato salad, and so many other dishes. She made sure all her children and grandchildren had their favorite cake and favorite meal on their birthdays no matter how old they were. Holidays were extra special, each one had a special tradition and were always spent with the entire family together. Margarita will be truly missed by all who knew and loved her.

Margarita Flores Lozano was born June 22, 1941, in McCoy Texas. Margarita went to join her Lord and Savior on May 16, 2018. She is preceded in death by her son Ernest Lozano, parents Antonio and Tita Flores and sister Janie Fazio. Mother... View Obituary & Service Information

The family of Margarita Flores Lozano created this Life Tributes page to make it easy to share your memories.

Send flowers to the Lozano family.