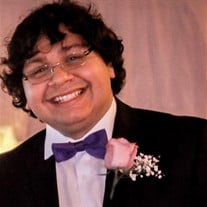 On June 14, 2021, Mark Anthony Aguirre Jr. went home to be with his Heavenly Father at the age of 25. He was born on November 27, 1995 in Houston, Texas to Mark Aguirre Sr. and Jeanette Yepez. He graduated from Douglas MacArthur High School in 2014 and went on to receive an Associates Degree in Fine Arts from Alamo Community College in 2017. On June 21, 2017, Mark was hired at HEB. He had plans to go back to school to get a degree in business and move up to a management position. Mark had many interests growing up. In his life, he played the violin, sang and performed for many on stage, and created art for those around him. Mark loved to make people smile and laugh and always used his creativity and talent to do so. He loved the theater, singing, reading, drawing, and playing in his D&D group every Thursday. He was an avid film, video game, comic book, and TV enthusiast. Most importantly, Mark was a family man. He did everything he could to be there for those around him. Mark was his happiest spending time with his parents, grandparents, his brothers, and sisters. Mark is preceded in death by his paternal grandfather Jose Antonio Aguirre Sr. He is survived by his parents Mark (Julia) Aguirre Sr. and Jeanette (Ralph) Cruz, his siblings Allison, Jonathan, Nathaniel, Christopher and Ashlee. He is also survived by his paternal grandmother, Rachel Aguirre, his maternal grandparents, Oscar Yepez and Dalia De La Cruz, as well as numerous aunts, uncles, and cousins. The family of Mark Anthony Aguirre Jr. wishes to thank those who surrounded him with love and support. Visitation will be held on Thursday, June 24, 2021 from 4:00p to 9:00p at the Camero Funeral Home. A prayer service will be held on Thursday Evening at 7:00p at the funeral home chapel. Funeral services will be held on Friday, June 25, 2021 at 10:00a at the funeral home chapel. Burial will follow at First Memorial Park cemetery.

On June 14, 2021, Mark Anthony Aguirre Jr. went home to be with his Heavenly Father at the age of 25. He was born on November 27, 1995 in Houston, Texas to Mark Aguirre Sr. and Jeanette Yepez. He graduated from Douglas MacArthur High School... View Obituary & Service Information

The family of Mark A. Aguirre Jr. created this Life Tributes page to make it easy to share your memories.

Send flowers to the Aguirre family.