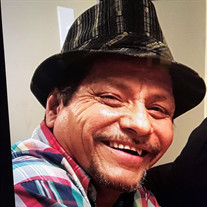 Martin De Los Santos Sr. born in Houston on September 7, 1964. At the age of 54 the lord called him home on the morning of January 29th, 2019. He is survived by his children Joe Paul Rodriguez, Erica Sophia De Los Santos , Martin De Los Santos Jr., and Eli De Los Santos. Grandchildren Joe Paul Rodriguez jr., Jayden Rodiriguez, Kaylie Rodriguez, Brittany Lauren Ward, Bryanna (Tony) Joe Ward, Robert Joe Ward Jr., Odyssey Lynn Pacheco, Josiah James Pacheco, Martin De Los Santos III, and Mason Cipreano De Los Santos. Great grand child Nalani Brielle Rodriguez. Martin De Los Santos was the hardest, strongest, quickest, smartest carpenter anyone would of had the privilege to had known. It was even more amazing to see him in action. He was very gifted and talented when it came to envisioning and creating masterpieces. He truly was a man you could say worked hard and got things done! Although small in stature, he out worked, out muscled, and out witted men twice his size. He definitely was the Hispanic MacGyver. Martin was a man who had an infectious personality and had friends everywhere he went. There isn't a conversation you've had with him that you can't look back and smile. He had a way to make you laugh and forget about everything bad in the world,even if it was for a moment. Martin was always the life of the party and enjoyed being around friends and family. He always had something "smart" to say about things. He always enjoyed listening to music. Although he couldn't play a guitar, he somehow always ended up with one. He always wanted to be well dressed and ironed up for a good time. Those who knew him well will cherish the times they shared with him. His memory will forever live in the hearts of those that surrounded him. It's hard to say goodbye to someone that brought happiness to so many but God gained another carpenter to help build his kingdom. Dad, friend, brother, primo we will miss you and never forget you, WE LOVE YOU!!!!! Our family wants to thank all the special people God put in his life that helped him in his latter part of his life. Those who cared and loved him for him [ his sisters, nieces, nephews, cousins, girlfriend, and friends.] We want to give a special thanks to Joe Pacheco for the sleepless nights, ice cream snacks, baths, conversations, changing him, feeding him, and the list goes on, but most of all genuinely loving our dad full heartily. Only God can repay what you've done for our dad. Thank you!

The family of Martin De Los Santos Sr. created this Life Tributes page to make it easy to share your memories.