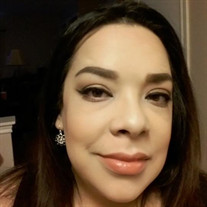 Olivia “Liver” Inez Rodriguez died unexpectedly in San Antonio, Tx. at the age of 43. Olivia is survived by her mother, Guadalupe Hernandez Rodriguez, her husband, Steven Paul Garza, daughter, Abigail Sofia Rodriguez, daughter, Mia Jordana Garza, step-son Steven Paul Garza, Jr., sister, Dr. Rebecca Sofia Rodriguez Chapman, brother -in -law, Aaron Kyle Chapman, sister- in -law Yesenia Abad, nephew, Rosendo Rodriguez IV, and nephew Kyler Gunner Chapman. Olivia is preceded in death by her father, Rosendo Rodriguez, Jr. and her brother, Rosendo Rodriguez, III. Olivia Rodriguez was born on October 16, 1976 in Lubbock, Tx. to Rosendo and Guadalupe Rodriguez. She graduated from Wichita Falls High School in 1995. She worked as a legal assistant for her father for many years. She later became a homemaker, caring for her two beautiful daughters. Olivia’s greatest accomplishments were her two girls. She has raised them to be strong young women with good hearts. Olivia had a heart of gold and an infectious laugh. To know Olivia, is to love Olivia. She had a hilarious sense of humor and was known for her off-handed “one-liners". She was the best wife, mother, daughter, sister, aunt, cousin, niece, and friend. She was a proud Democrat and always stood up for those in need. Olivia will be missed by so many. She will always remain in our hearts and she will never be forgotten. A funeral is scheduled for November 9, 2019 at Camero Funeral Home located at 20567 State Hwy 16 South Von Ormy, TX 78073. Visitation will be from 9 a.m. - 12 p.m. with a service immediately following from 12 p.m. - 2 p.m. All are welcome to attend and celebrate Olivia’s life. Condolences can be sent to www.camerofuneralhome.com. The family would like to thank everyone who has provided love, support, and kindness over the last week.

The family of Olivia "Liver" Inez Rodriguez created this Life Tributes page to make it easy to share your memories.