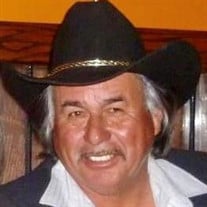 Rodolfo Molina, born January 7, 1955, to Jose Molina and Amalia Arriaga in San Antonio, Texas left to be with the Lord on September 4, 2021 at the age of 66. He was preceded in death by his mother Amalia A. Molina, father Jose P. Molina, and sister Diana Guerrero. Survived by his loving wife Maribel S. Molina , sisters Maria Reyes, Olga Trevino, Sylvia Martinez, Armendina Guerrero Deleon, Brothers Jose P. Molina Jr. Fabian Molina , Larry Molina and by his beautiful children Diamondtina Rios (Alonso) Rudy Molina (Brinda) Adela Molina-Carriero (Michael),Marisela M. Mendoza(Robert) and Lisette M. Avila (Jacob); 12 precious grandchildren Jacob, Michael, Ryan, Kyleigh, Caden, Analicia, Kiveli, Michael Jr., Lilliana, Brianna, Kaitlin and Robert Jr. Numerous nieces and nephews. His contagious smile and laughter will be greatly missed by all who knew and loved him. Rodolfo was known by his children for being a hardworking man. He was an amazing provider and showed his children what having a strong work ethic looked like. He showed his children, great qualities of a leader. From a child working in the North Dakota fields with his family to riding tractors, combining and harvesting as an adult he exemplified hard work. A side from work in his later years he enjoyed spending time with his children and grandchildren. He loved his music and you could often catch him dancing to country and Tejano with his beautiful wife. These are just some of the beautiful memories left to his children. He loved telling wild stories and making people laugh he was definitely the life of the party. He had a generous heart, opening the doors to his home to whomever needed it. Family was always first. His presence will be greatly missed but we know this is not goodbye but see you later alligator as he often told his children growing up. . A private family Visitation will be held on Tuesday September 21, 2021 at 4:00 p.m. at the Camero Funeral Chapel. Public visitation will began at 5:00pm. A rosary will be held Tuesday Evening at 7:00 p.m. Funeral Mass will be held on Wednesday September 22, 2021 at St Clare Catholic at 10:00 a.m. Burial will follow at First Memorial Park Cemetery.

Rodolfo Molina, born January 7, 1955, to Jose Molina and Amalia Arriaga in San Antonio, Texas left to be with the Lord on September 4, 2021 at the age of 66. He was preceded in death by his mother Amalia A. Molina, father Jose P. Molina, and... View Obituary & Service Information

The family of Rodolfo Molina created this Life Tributes page to make it easy to share your memories.

Send flowers to the Molina family.