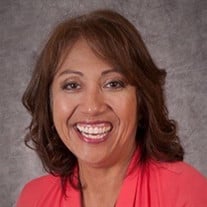 Sandra Aguilar Scott, age 55, died on Tuesday, April 17, 2018 in her home surrounded by family. From her birth in San Antonio on January 23, 1963 to her death on Tuesday she nourished people around her with love, faith, and her beautiful smile. She was born in San Antonio to Genaro & Catarina Aguilar and was the oldest of three children. Sandra growing up had a talent for music, she played in her high school band up until her senior year. She began her career at Kelly Air Force Base in San Antonio, where she stayed employed with them for over 10 years. It was Sandra’s smile, I am sure, that attracted Thomas Keith Scott to her in 1990 at Kelly where Tommy was visiting San Antonio for TDY. Sandra and Tommy immediately fell in love and married in 1991, immediately after the wedding Sandra moved to Ohio from where Tommy is from. Tommy and Sandra lived in Dayton, Ohio where they were both employed at Wright Pat Air Force Base. They moved to Fairfax, Virginia and then eventually moved to Columbus and then build a home in Pickerington where they started a family and Thomas Keith Scott II was born November 22, 2002. Sandra began employment with the state of Ohio in 2001, Sandra’s all time goal was to complete her Bachelor’s Degree of Science in Business Management from Franklin University where she walked the stage in January of 2018. Sandra became very ill in November of 2017, she had visit after visit and no one knew what was wrong, at the end of January of 2018 a week after graduation she was diagnosed with Pancreatic Cancer, Sandra was not given any treatment plan because of the severity of this disease. Sandra’s strength through this journey and her suffering has showed us her courage, she took the pain day after day in selflessness. She was patient and hardly ever complained. Sandra leaves behind her husband of 27 years Thomas Keith Scott and her son of 15 years Thomas Keith Scott II, her Father Genaro Aguilar, two Sisters Mary Esther and Maricela Aguilar, her niece and God Daughter Erica Nicole Aguilar DeLuna, preceded in death her mother Catarina Aguilar, her mother in law Elva Scott and Father in Law Chacy Scott and other family relatives. Sandra will be remembered as a bright, shining light with her smile and personality. Visitation will begin on Sunday, April 29, 2018 at 4:00 p.m. at St. Clare Catholic Church, 7701 Somerset Rd. A Rosary Service will be held at 7:00 p.m. on Sunday Evening at Church. Funeral Procession will depart Camero Funeral Home on Monday, April 30, 2018 at 9:15 a.m. for a 10:00 a.m. at St. Clare Catholic Church. Burial will follow at First Memorial Park Cemetery. You are invited to sign the online register book at www.camerofuneralhome.com

Sandra Aguilar Scott, age 55, died on Tuesday, April 17, 2018 in her home surrounded by family. From her birth in San Antonio on January 23, 1963 to her death on Tuesday she nourished people around her with love, faith, and her beautiful smile.... View Obituary & Service Information

The family of Sandra Aguilar Scott created this Life Tributes page to make it easy to share your memories.

Send flowers to the Scott family.