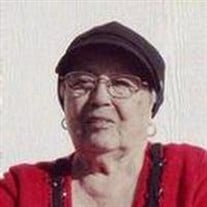 Socorro Valdez Sanchez, born on December 18, 1929, passed away Friday, October 25, 2013 in Jourdanton, Texas, at the age of 83 years. Mrs. Sanchez is survived by her step-sons, Carlos A. Sanchez and wife Maria, from San Antonio, Texas, and Jose... View Obituary & Service Information

The family of Socorro Valdez Sanchez created this Life Tributes page to make it easy to share your memories.

Send flowers to the Sanchez family.